Chef Ainsley Harriott has travelled to the Med for his latest TV series and cookbook – and we’ve handpicked a main, dessert and cocktail to inspire your summer holiday menu.

Hopefully, we’ll all be able to easily visit warmer climes again soon, but until then, the dishes from Ainsley’s Mediterranean Cookbook are sure to bring a spot of sunshine to your table. 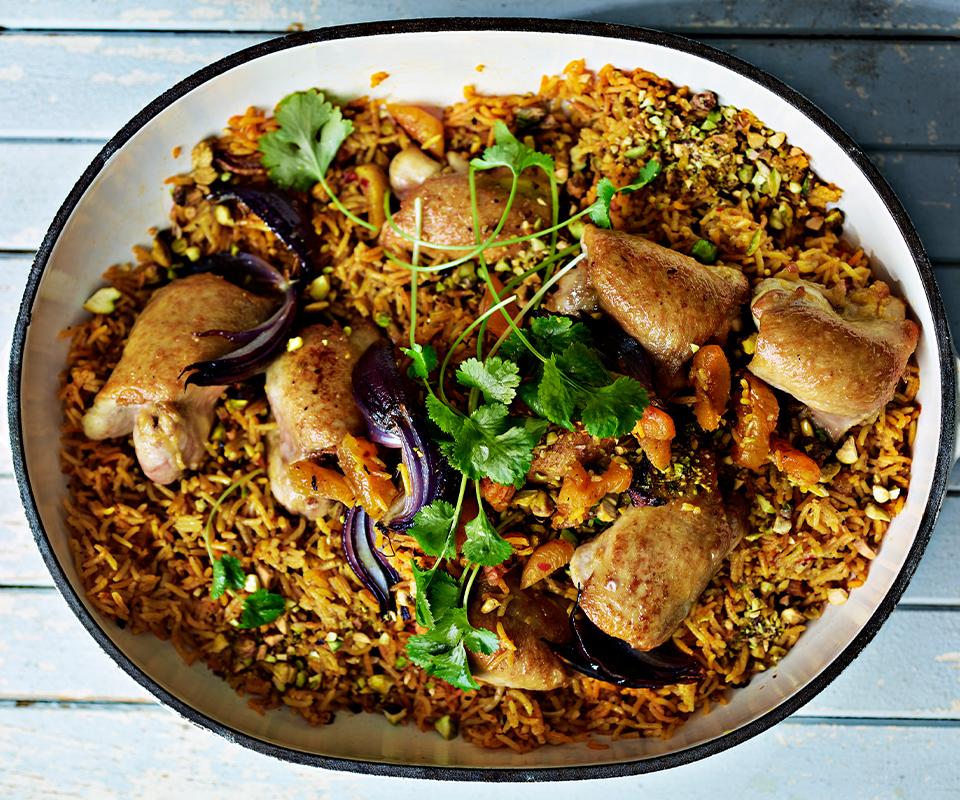 Ainsley says: With the flavours of a Moroccan tagine, this quick and easy one-pot is perfect for a mid-week supper. I’m using a ready-made harissa paste to add a depth of flavour and a smoky chilli kick. Rose harissa gives a special sweetness and aroma, but you can use ordinary harissa if you prefer and you can add more or less depending on how spicy you like it.

1 cinnamon stick, broken in half

2) In a large casserole over a medium heat, toast the pistachios or almonds for 1–2 minutes. Keep an eye on them to make sure they don’t burn. Remove to a bowl and set aside.

3) Heat the oil in the casserole over a medium heat, add the red onion and cook for 4–6 minutes until softened but not coloured.

4) Add the turmeric and cook for 30 seconds until fragrant, then add the chicken and cook for 4–6 minutes, turning until browned all over.

5) Stir through the harissa paste, then add the rice, apricots and stock.

6) Add the cinnamon stick, season with salt and a generous grinding of black pepper and stir.

7) Bring to the boil, then remove from the heat, cover with a lid and bake in the oven for 20–25 minutes or until the chicken is cooked through and the rice is tender. Check halfway through the cooking time and add a little more stock if needed.

8) Remove the cinnamon stick, stir in the toasted pistachios or almonds, chopped coriander and check the seasoning. Serve garnished with coriander sprigs. 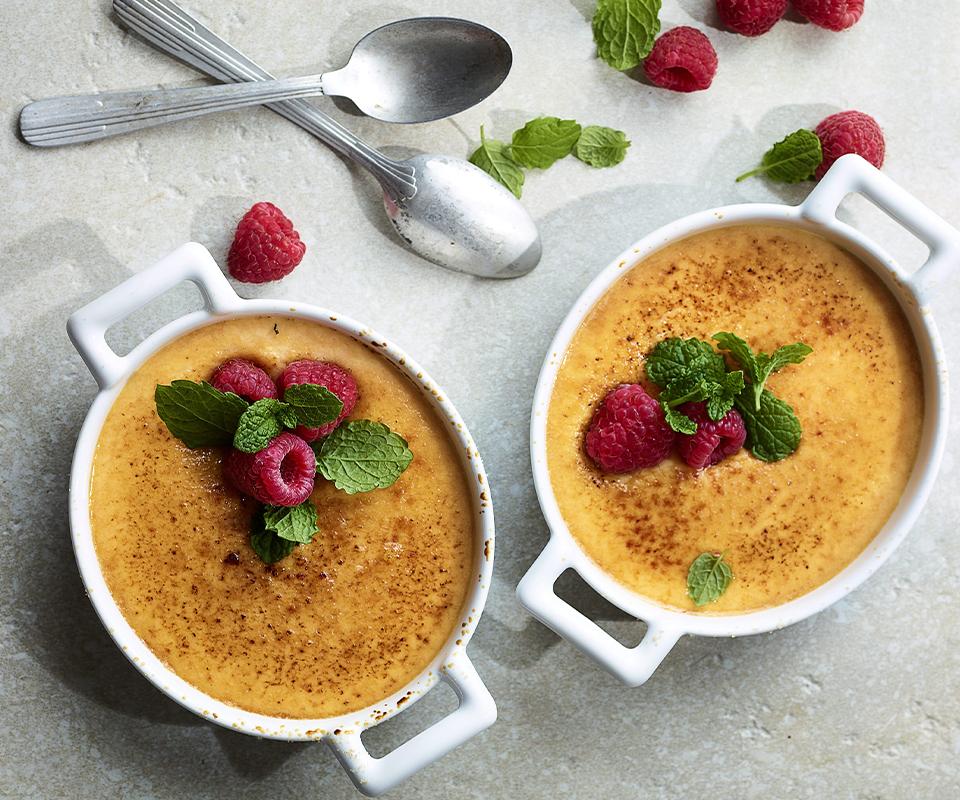 Ainsley says: Crema Catalana is a classic Spanish dessert similar to a French crème brûlée – it’s a smooth Spanish custard with a hint of citrus and spice, topped with a hardened caramel. A traditional Catalana is not as rich as a crème brûlée and the Spanish use cinnamon rather than vanilla to flavour the custard. Originally from Catalonia, the dessert is popular throughout Spain and I definitely enjoyed a couple while in Seville and Granada. Although not traditional, you can top with some fresh seasonal fruit, if you like – I like to serve mine with raspberries or figs.

1 cinnamon stick, broken in half

1) Put a heavy-based saucepan over a low–medium heat and add the milk, pared zests and cinnamon stick. Gently bring to the boil. As soon as it begins to boil, remove from the heat and set aside for 20 minutes to allow the flavours to infuse.

2) Meanwhile, beat or whisk the egg yolks, sugar and cornflour together in a bowl until pale, thick and creamy.

3) Using a slotted spoon, remove the cinnamon stick and pared zests from the infused milk and place the pan back over a very low heat. Slowly add the egg mixture to the warm milk, whisking continuously for 8–10 minutes until the cream begins to thicken. When the liquid is thick enough to coat the back of a wooden spoon, remove the pan from the heat and pour the mixture into six shallow serving dishes or four ramekins.

4) Cover the dishes and let cool to room temperature, then transfer to the fridge to chill for a couple of hours.

5) To serve, sprinkle a layer of brown sugar on top of each dessert and caramelise using a blowtorch or by placing under a hot grill until the sugar bubbles and turns golden brown. Allow the sugar to harden, then serve immediately, scattered with raspberries and fresh mint, if using. 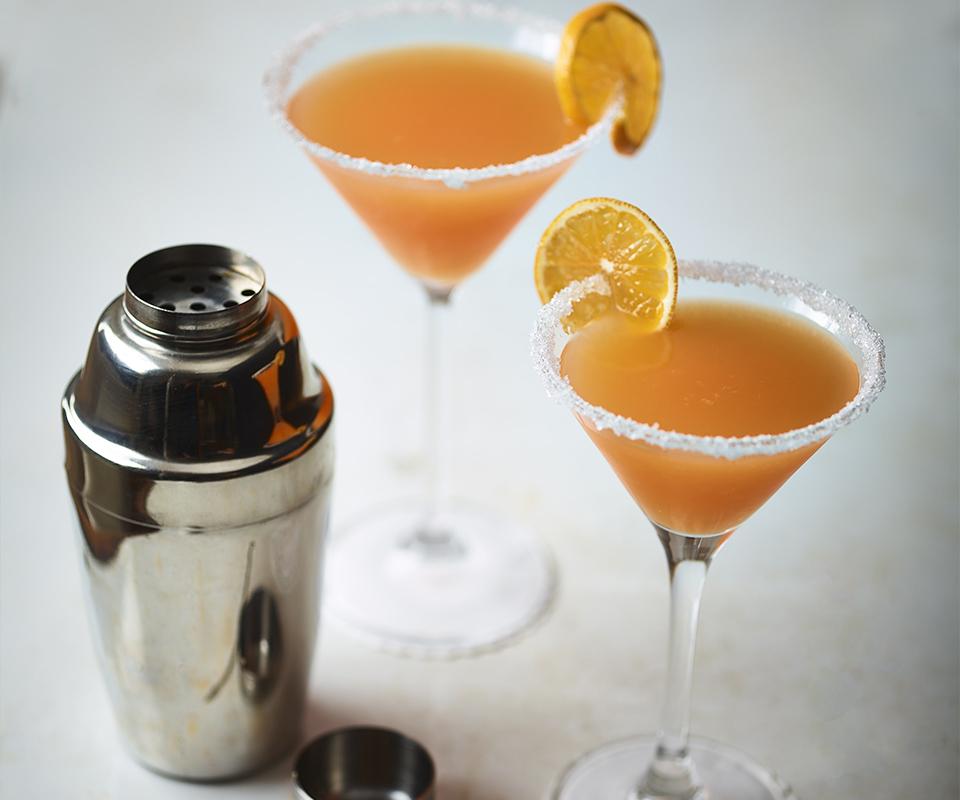 Ainsley says: A pompia is a rare citrus fruit that grows only in the area of Siniscola on Sardinia. The fruit is rather too bitter to eat straight from the tree, but it is used in the preparation of local desserts, sweets and liqueurs. This is a twist on the Paridiso – an Italian cocktail somewhere between a Martini and a Screwdriver. Traditionally, limoncello is used but if you can find Sardinian Pompia liqueur the unique sharp citrus adds a real zing to this refreshing cocktail. It’s quite strong, so do add more orange juice and serve over ice if you prefer a longer drink.

To decorate the glasses

90ml vodka (orange-flavoured, if you have it)

A large handful of ice cubes

2) For the cocktail, combine all of the ingredients in a cocktail shaker with ice and shake vigorously to chill. Strain into the cocktail glasses and garnish each with an orange wheel.